“Thirty years on from the original National Theatre production, Ted Hughes’ thrilling version of Seneca’s Oedipus has lost none of its power to shock and disturb.
Using a dramatic verse of characteristic richness and intensity, this unique re-telling of the Oedipus myth will be Artistic Director John Durnin’s final production for the Northcott.” 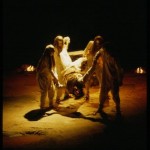 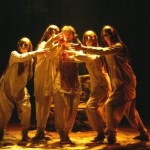 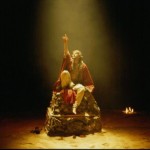 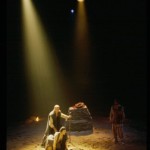 Notes:
A really pleasing result here. My first really stylised design, a good communication with the set designer/director enabled me to establish the look of the show early on, and work through the rehearsal process with it in mind. The more stylised moments in the piece were highlighted with strong beams, while real firelight provided a beautiful earthy quality. The chorus were sharply crosslit on the climbing poles upstage of the set. A hazer was used throughout the show, and for about 30 minutes before the show started to ensure the atmosphere was thick with haze.