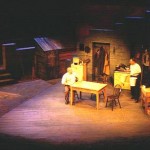 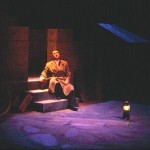 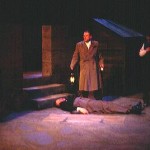 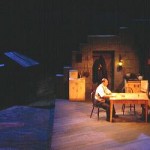 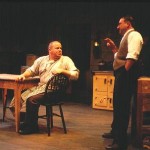 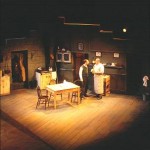 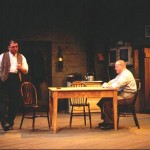 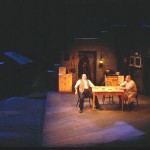 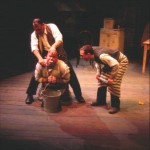 Notes:
Another challenge. The two prime concerns were a huge skyscape hanging over the acting area and the division of the stage in half, indicating the kitchen on SL and the yard SR. The skyscape limited top/downlight massively, so I had to hang extra positions at the sides of it to ensure there was enough light upstage. There was a lot of emphasis on practical light sources during the show, so many cues were taken up with subtly moving highlights around the set as the lanterns were moved from kitchen to yard and back. In order to achieve blackouts on the whole stage without the practicals remaining lit, we modified one of the practicals so that it could be radio controlled. It worked most of the time, but was unfortunately subject to interference from (we think) passing taxis. Another lesson learned….